The first phase of this Team project is planned to roll out in our next build which is basically upon us. (However, please note the build will not be early this week)

That phase is what we are calling "spotter functionality.” The spotter functionality will allow any member to join any race session as a spotter, similar to the way any member can join any race session as a spectator or in ghost racing mode. However, every member controls how and who they will allow to spot their races. A member can turn the spotting functionality off so nobody can spot for them, or on, so anyone can spot for them. In addition, members can also limit spotting so that only friends can spot, or only people they have provided a password can spot. A spotter can view the race with all the same views that are available in Spectator Mode.

The spotter and driver can talk or text together privately in-sim. We are basically replacing the old radio with a new radio that will be a combination radio/scanner. Both driver and spotter can set-up buttons on wheel or other buttons in the options area like they do for existing chat and easily scroll from team radio to public radio, for example. Basically the operator controls the microphone portion, like a real-world scanner. Therefore if driver and spotter set the function to private, the conversation within that group will be private. If spotter is set to public and driver to private, the spotter will be the only one to hear the driver talk, but everybody else in the race/session will hear the spotter talk.

- Spotting allows members to join sessions and act as aother driver's spotter through various voice chat channels. You can spot through the myRacers page, Spectator Sessions, or through the myRacers popup. Enable spotting in the settings panel under "General Settings". Here, you can also control additional spotter privacy settings.

- Select "Anyone can be my spotter", and any iRacing member can spot for you.

- Select "Only friends can be my spotter" to restrict access to just your friends.

A lot of internal structural changes have been made to the race servers and the simulation to support some features that will be coming out in future builds. This build includes the first of those features: the ability to have people connect to sessions that you run and be your spotters. For now, we'll call you and your spotters "teammates".

Spotters are participants in the session, just like drivers. Spotters are there to help the driver do their best during the session. They are not "neutral observers", like spectators. Therefore, once you have registered for a session as someone's spotter, you have committed yourself to that driver for the entire session. You cannot disconnect, withdraw from the session, and then re-register for the session as a spectator, as someone else's spotter, or as a driver yourself.

You can have up to six people connected to the server on your team at one time - the driver and five teammates. Over the course of the session you can have up to around 60 different people connect to the server as your teammates, but never have more than six connected at once. If a seventh person tries to connect they will be rejected, and the original six will be informed of this. You can then decide whether one of you should disconnect to allow this other person to join. While it is unlikely anyone will use this capability to the extremes for spotting, it is good to be aware of this restriction as additional features become available in future builds.

You will see a [Start Spotting] or [Stop Spotting] button on the Session screen if you are registered as someone's spotter. Clicking on [Start Spotting] declares your intent to spot for the driver and will change the button to [Stop Spotting]. Clicking on [Stop Spotting] declares your intent to cease spotting for the driver. As long as any one person on the team is connected to the session and has declared their intent to spot, the computer-generated spotter's voice will be disabled, and the computer spotter will only give high priority messages via text chat. Some of the computer-generated spotter's messages have been adjusted from low to medium as a part of this feature. If there is nobody that you could possibly spot for (the team's driver is currently disconnected), the button will be grayed out.

Text and voice chat within the simulation have been replaced with a race radio. The new radio is a combination scanner and transmitter.

The scanner will automatically scan through all of the channels that are programmed into the radio. The scanner can have up to 32 channels.

A channel is identified by its name. Channel names begin with the @ symbol, and can include letters, digits, and the - (dash) symbol. Channel names are converted to all upper case letters, and so they are not case sensitive. Channel names can be up to 15 letters long, including the leading @ symbol.

There are some predefined channel names:

@ADMIN - Anyone that has admin privileges on the server can scan and talk on this channel. This channel is intended to allow server admins to talk among themselves, without others on the server listening in.

@DRIVERS - This is roughly the equivalent of the "old" radio. All drivers can scan and talk on this channel.

@SPECTATORS - Anyone can scan and talk on this channel, but it is only pre-programmed into the radio for spectators. Spectators can now text and voice chat among themselves, without interrupting the drivers.

There are some predefined channel names that actually map to many distinct channels internally:

@CLUB - There will be a separate channel for each club. Drivers can only scan and talk on their own club's channel.

@TEAM - Each team will have its own channel. Only people that connect to the server as part of your team can scan and talk on your team channel.

Server admins can always scan and talk on any channel, provided they know the channel name.

Your radio will come pre-configured with a particular set of channels, depending on how you registered for the server, and your rights on the server:

- If you are a driver in the session you will scan the @DRIVERS, @TEAM, @CLUB, @RACECONTROL, and your own @PRIVATE channels.

- If you are a spotter for a driver in the session, you will scan the @TEAM, @RACECONTROL, and your own @PRIVATE channels.

- If you are a spectator you will scan the @SPECTATORS, @RACECONTROL, and your own @PRIVATE channels.

- All server admins will scan the @ADMIN channel.

Since it would be difficult to understand what is being said if several people talk at the same time on different channels, you will only hear one person speaking at a time. The radio channels have priorities. Your radio will automatically silence someone speaking on one channel if someone starts speaking on a higher-priority channel. For example, if you are hearing someone speak on @DRIVERS and one of your teammates starts talking on your @TEAM channel, your teammate's message will take priority. Channels are ordered as follows, from highest to lowest priority:

Will give you more information about a specific command.

Will list the set of channels that are programmed into your radio. Each channel will be preceded by up to 4 letters, indicating some properties about the channel.

"s" means that the channel is being scanned by your radio's scanner.

"t" means that you can transmit on this channel.

"m" means that you have muted this channel.

"a" identifies the channel your transmitter is set to (the "active" channel).

Will add the specified channel name to your radio, and switch your transmitter to that channel. For this and all the other radio chat commands where you specify a channel name, you can include the @ on the name (@add @lizard), or not (@add lizard). Both will work.

Will remove the specified channel from your radio. Some channels can not be removed.

Will mute the channel. You will no longer see any text chat, or hear any voice chat sent on the channel. Some channels can not be muted.

Cancels muting on the specified channel.

Turns off scanning for any channels on your radio that you are allowed to mute. Some channels, like @RACECONTROL, can not be muted, and will still be scanned.

Turns scanning back on.

None of the changes made to your radio using the chat commands are "sticky". They are forgotten each time you exit the simulation. 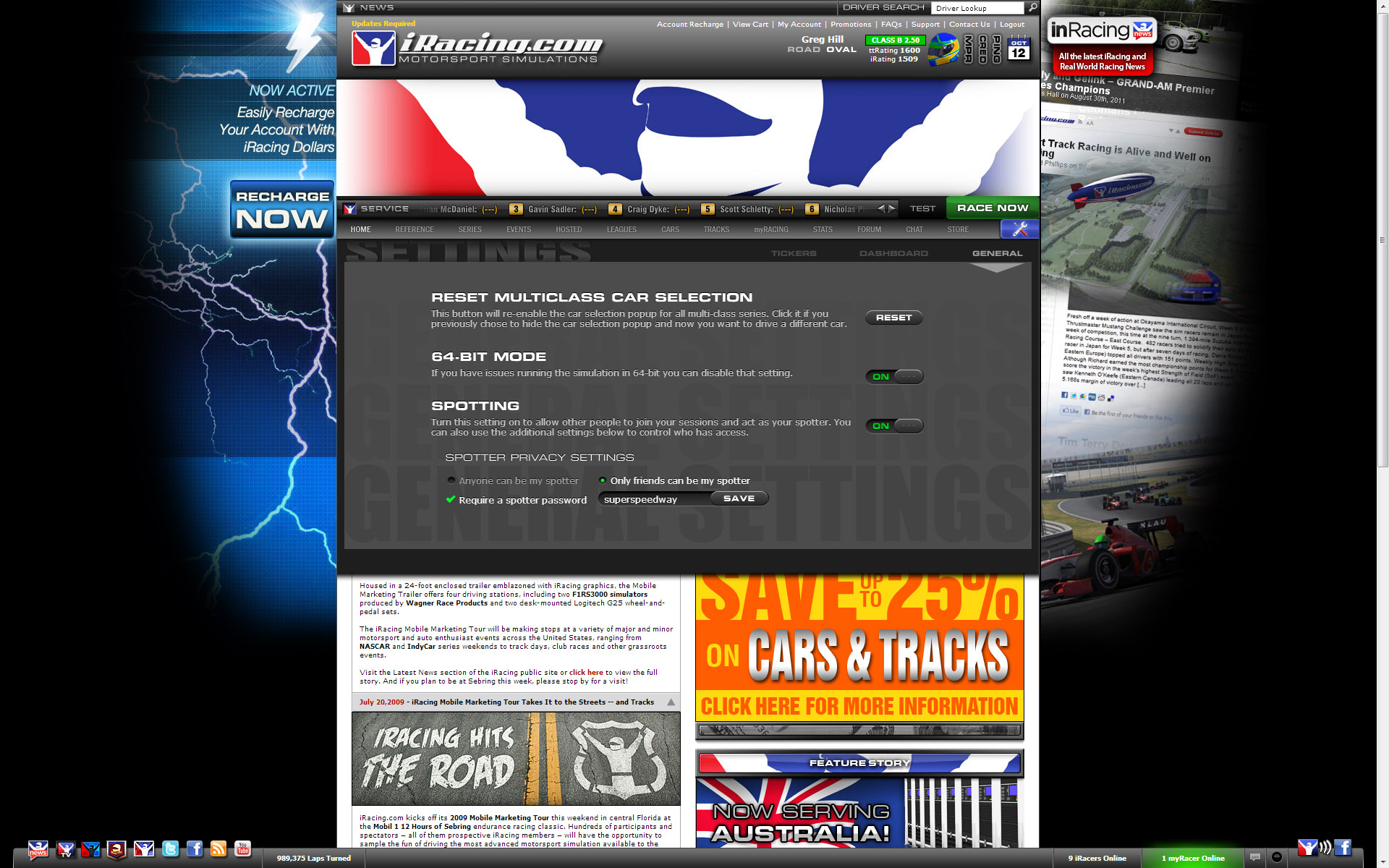 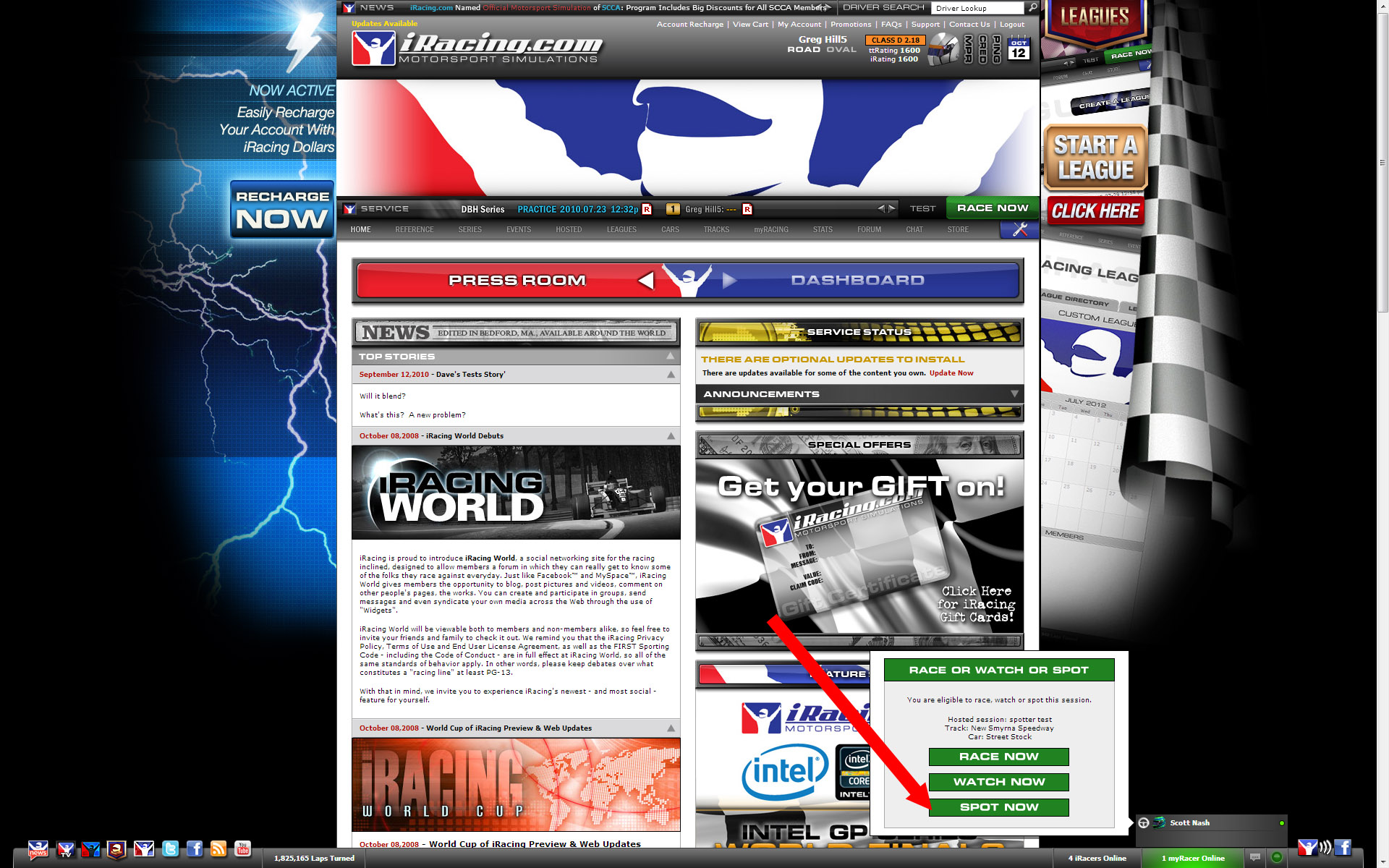 Start Spotting from within the session: 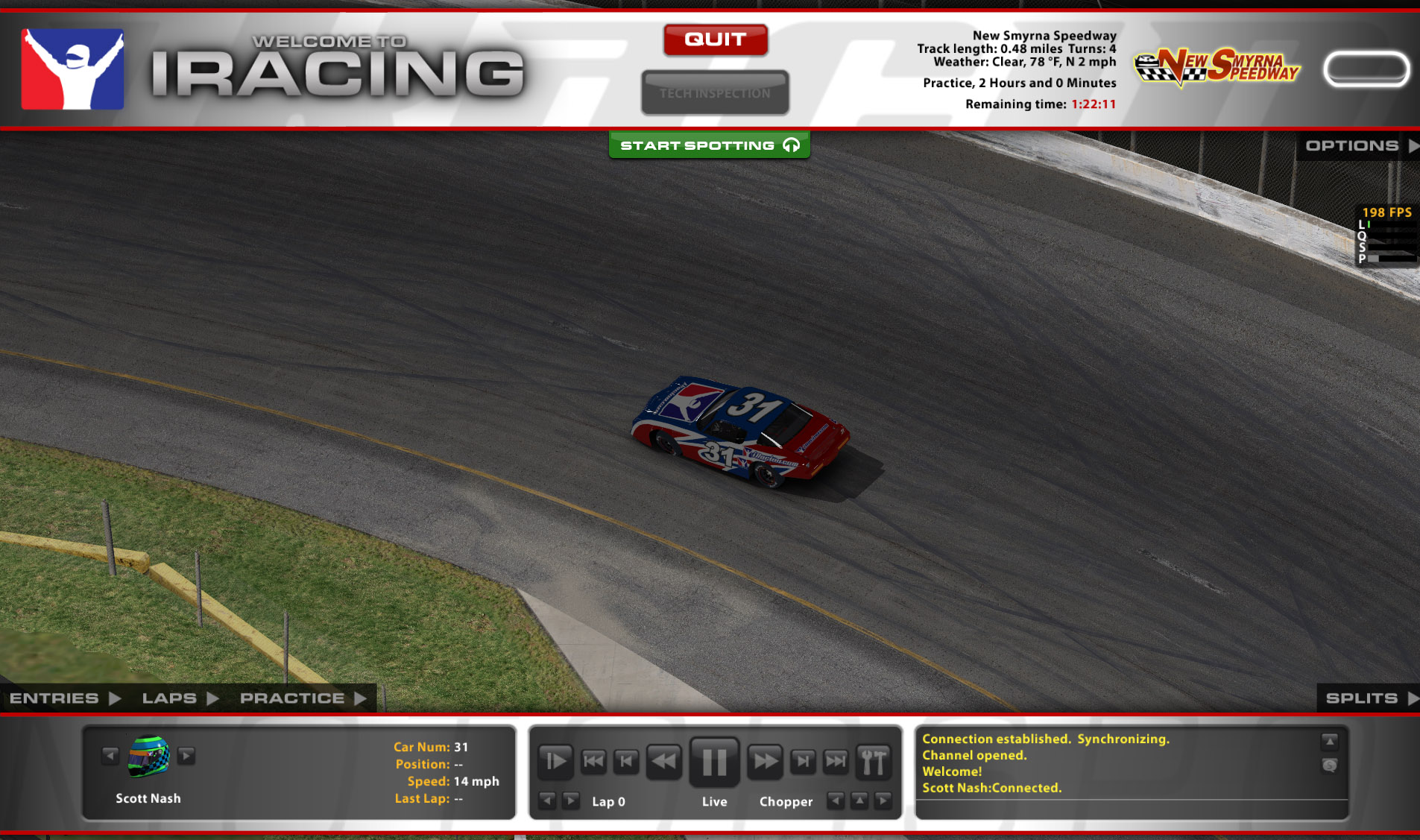