The Connection Type selection in My Account controls the maximum amount of data that the sim and the race server will exchange with each other. The higher the setting, the more data the two are allowed to exchange (the bigger the "packet"). The bigger the packet, the more space there is available to send car information to you, and so the more likely it is that the server will send you positions for more cars.

The server has the ability to send cars to you (their positions, as well as some other information) using different levels of detail. The different levels of detail require different numbers of bytes of information to be transmitted per car. Depending on the number of cars on track, the amount of space available in the "packet", and some other factors, the server will choose an appropriate mix of the level of detail it includes with each car it transmits to you. The higher your Connection Type selection, the more likely it is that the server will choose the higher detail level for more of the cars in the field.

The level of detail sent for any given car won't have any measurable impact on your CPU usage or your frame rate.

The extra overhead of handling the larger packets that can be generated when using the higher bandwidth selections might have a measurable increase in CPU usage IF there are enough cars in the session to actually use that extra space.  See Max Cars below.

The number in the Connection Type description is what we think you should have for an actual Download speed if you want to use this selection.  However, if your ISP has a very limited upload speed, you should consider that as well.  The actual figures are as follows:

Slightly higher for IPv6, due to the increased packet header sizes.  Current as of 2018-09-10.  Satellite connections are not supported.

For the higher selections, the rates are only hit for extended periods of time if you are in a dense sessions (60 cars on track), though those rates can be reached sporadically during the session, even with fewer cars.

Then scroll down to the Preferences section and choose the appropriate option from the Connection Type drop down.

This change will not take effect if you are currently in the sim.  If you are in the sim when making this change, you will need to exit from the session and relaunch the sim to join the session with the new connection type in effect.

The Max Cars setting on the options/graphics page tells the server to which you're connected to not send you any more than the selected number of cars. If you have this set at 15, and there are 60 cars in the field, you will only ever be given positions for 15 cars at any one time. Over time, as you move through the field, the particular set of 15 cars will change - you will generally be given the 15 cars that are closest to you, biased more towards cars that are in front of you.

However, having it set to 63 does not necessarily mean that you will be transmitted all 60 cars in a 60 car field. It takes some network bandwidth to send each car to you, so the actual number of cars you will be sent will depend on a number of factors. The biggest controlling factor is what you've chosen as your Connection Type in the My Account section of the member web site.  See explanation above.

The number of cars that get transmitted to you will have a very measurable impact on both CPU usage as well as frame rate. All of those cars have to be moved through the world, they make sounds, they can be collided with, and they have to be drawn on screen.  With the slowest connection type selections, the packets will not have enough space for the server to send all of the cars in a large field to you, regardless of what you have set Max Cars to. This is why the higher bandwidth connection type selections are labelled "requires fast computer" - you can end up having more cars sent to you, and it takes more CPU and GPU power to deal with them. 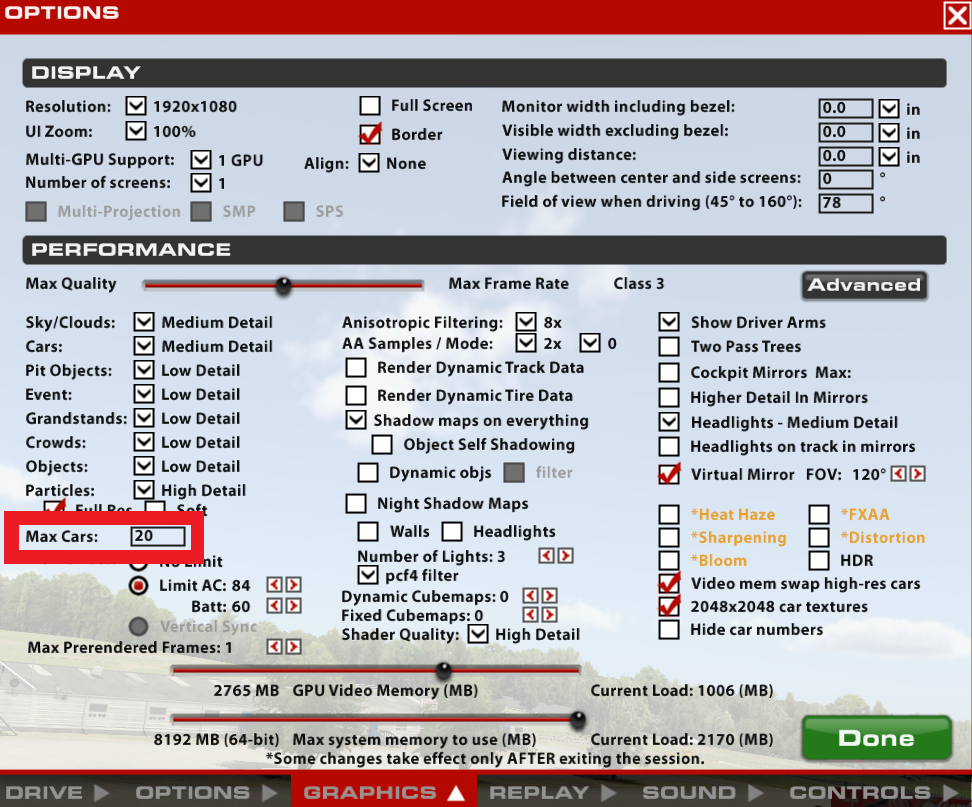